The Ministry of National Education and Scientific Research, with the support of the University of Architecture and Urban Planning and the Technical University of Civil Engineering in Bucharest, is proud to announce the Laser Valley Land of Lights International Ideas Competition.

The competition is dedicated to students, early graduates and young researchers. Consortia between Universities and Research Centres are strongly encouraged to participate.
Save the date: The design brief and the competition webpage will be launched on the 18th of March, 2016 (laservalleycompetition.ro).
Please consider disseminating the following announcement within your academic networks. 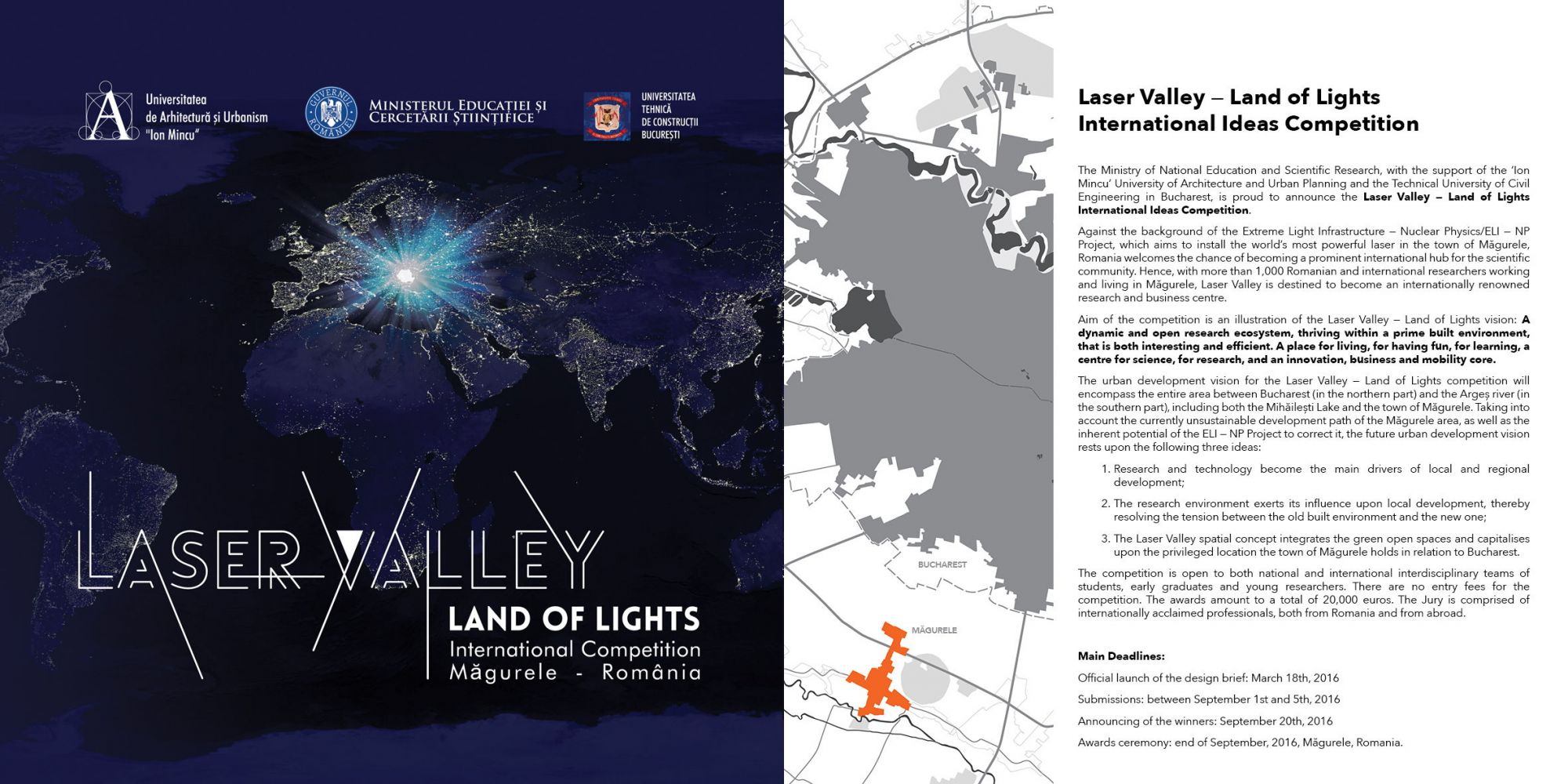 The Ministry of National Education and Scientific Research, with the support of the University of Architecture and Urban Planning and the Technical University of Civil Engineering in Bucharest, is proud to announce the Laser Valley Land of Lights International Ideas Competition.

Against the background of the Extreme Light Infrastructure Nuclear Physics/ELI NP Project, which aims to install the most powerful laser in the town of Măgurele, Romania welcomes the chance of becoming a prominent international hub for the scientific community. Hence, with more than 1,000 Romanian and international researchers working and living in Măgurele, Laser Valley is destined to become an internationally renowned research and business centre.

Aim of the competition is an illustration of the Laser Valley Land of Lights vision: A dynamic and open research ecosystem, thriving within a prime built environment, that is both interesting and efficient. A place for living, for having fun, for learning, a centre for science, for research, and an innovation, business and mobility core.

The urban development vision for the Laser Valley Land of Lights competition will encompass the entire area between Bucharest (in the northern part) and the river (in the southern part), including both the Lake and the town of Măgurele. Taking into account the currently unsustainable development path of the Măgurele area, as well as the inherent potential of the ELI NP Project to correct it, the future urban development vision rests upon the following three ideas:

1. Research and technology become the main drivers of local and regional development;
2. The research environment exerts its influence upon local development, thereby resolving the tension between the old built environment and the new one;
3. The Laser Valley spatial concept integrates the green open spaces and capitalises upon the privileged location the town of Măgurele holds in relation to Bucharest.

The competition is open to both national and international interdisciplinary teams of students, early graduates and young researchers. There are no entry fees for the competition. The awards amount to a total of 20,000 euros. The Jury is comprised of internationally acclaimed professionals, both from Romania and from abroad.